For the third straight time, the Utah State Aggie men’s tennis team emerged victorious over the BYU Cougars as they eeked out a narrow 4-3 victory on the Sports Academy Tennis Courts in Logan, UT Friday.

“We had a good start in doubles, but I told our guys I knew BYU would be tough in singles,” said first year Aggie tennis head coach James Wilson.

Wilson said there were many key plays in the match that led to their victory.

“When Jaime won his third set tiebreaker 8-6, I felt really good about our chances,” said Wilson. “I knew the rest of our matchups would be more favorable after that.”

Luckily for the Aggies, Jaime Barajas of Woodland Hills, California, played a victory match that sparked a furious comeback on the Aggie side in the singles matchups. This led to their third straight victory over the Cougars.

“Utah State University is a place where success is accessible.”

Coach Wilson (a name fitting, seeing as Wilson is a renowned tennis brand) had a good strategy going into his first year as the Aggie tennis head coach.

“I just wanted to take it one match at a time,” he said. “We won’t win our conference if we don’t keep improving.”

Wilson hopes that this strategy will help them continue to win in their tough schedule ahead.
He was happy to take the coaching position at USU after seeing them take home their impressive first-ever Mountain West Conference Title last year.

“I was impressed with the support that they give their student athletes when I first interviewed for this position,” he said.

Wilson really believes that this is a place where success is accessible.

The play of the night was a SportsCenter Top 10 Plays nominee after USU Football Head coach Matt Wells tweeted  this in-between-the-legs hit.

This shot was hit by Aggie singles player Kai Wehnhelt of Berlin, Germany.

“Kai is a spectacular athlete with a lot of physical ability,” Wilson said.

Kai’s new nickname could possibly be “The Berlin Wall” (before it fell down) as playing him in a match is sometimes like trying to hit over a 100 foot wall.

Wilson has high respect for his in-state rival, BYU. They are a tough and well-coached team that was ahead three matches to one before the Aggies came back and stole the lead.

“They always play hard regardless of where they are ranked,” he said.

Against the Aggies, the Cougars played well early with a 3-1 lead but the Aggies are just the most recent example of a team who came back even when their backs were against the wall.

For those future tennis players aspiring to play at a division 1 level, Wilson recommends that athletes be as independent as they can.

“They will get more opportunities as they go to tournaments and compete on their own,” he said. “They just need to push themselves hard every day because they get out what they put in.”

Wilson holds himself to the same high standards to which he holds his players. This makes sense, considering his favorite tennis player of all time is Andre Agassi, a competitor who has given a lot back to the sport.

Wilson sees a bright future in the USU tennis program. 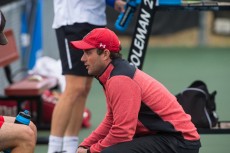 The 2009 college graduate of the Texas Tech tennis team is doing a great job maintaining the Aggie tradition in a valley that is crazy about tennis.

From Logan and Ridgeline High in the south of the valley, to the USU tennis team in the north, to the Sports Academy Racquet Club where the sagebrush grows, “love” literally means nothing in Logan, Utah.

what is the hive?

Dan is a sports fan. Deportes means sports in Spanish. Dan learned Spanish after living in southern Chile for two years. His purpose for this blog is to bring sports from the Beehive State to the world.
%d bloggers like this: