Some of us love good old banter especially in the college ranks. The anonymous Twitter burner account @boneyfuller enjoys trolling roster pictures of BYU’s opponent that week. The Utah State Aggies had a game newsletter for the student section that had dirt on the opposing team. It started as the refraction and is now called The Bangarang. Many Utes fans are all some of the best in the business at trolling the other team.

Now it’s time to troll the opposing teams of the Jazz but remember, it’s all in fun and there is a line. Do not cross it. Not all but a select few Jazz fans have been exposed yelling classless things at games about the families of opposing players. That has to stop. Let’s have fun and stick to making fun of their haircuts, last names, college, etc.

The Starting Lineup for the Kings…..

College: The Kentucky Wildcats who lost in the Elite 8 in a last second to UNC and sent Fox home crying. No, literally there were guys in the locker room crying and he was one of them. Just ask Erik Spoelstra.

Nicknames: It’s an old joke but you could always yell “What does the fox say?”

Also, a good play on his name could be an ode to a classic Comedy Central skit.

Yell “D-A-A-Ron!” especially if you’re a balding man with a mustache.

Why he isn’t good: Donovan Mitchell was drafted outside the top ten yet has still almost doubled the scoring output of this guy. He’s not a bust but he doesn’t look close to the best guy ever drafted fourth overall.

Height: an inch taller than the point guard. Seriously are the Kings trying to start a 6 foot 6 and under league?

Weight: 214 pounds of what he’d like to call muscle

College: Oklahoma where he was a better than average shooting guard who was nowhere near as good of a shooter as the standout Oklahoma shooting guard Buddy Hield was this year.

Nicknames: Say any quote from Elf. Seriously he’s about as tall as Will Ferrell and it would be hilarious. “Buddy the Elf what’s your favorite color?” is a classic. Also yell “Wait, I forgot to give you a hug!” Don’t actually hug him though. You can’t even take pictures of NBA players without your phone getting smacked these days. If you don’t know Elf just yell “Poor man’s Trae Young!”

Why he’s not good: He’s a poor man’s Trae Young and we all know what guys named Trae think about practice. If he’s not willing to put in the work he will always be a college standout and an NBA bust. 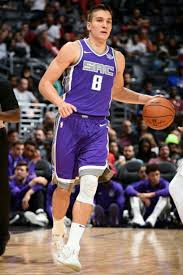 College: He didn’t have to go to college in Europe but he played on some professional European teams that nobody can pronounce

Nicknames: His name is a tongue twister. Say his name five times fast and his name is “Bologna Sandwich!” so make sure to yell that at him if you happen to be a poor soul Jazz fan in the middle of nowhere California area.

Why he isn’t good: Europeans are only good if they are big man that can shoot. He isn’t big for NBA standards and he can’t shoot.

College: A Michigan State team back when they used to go to the Final Four and compete for championships

Nicknames: We all know his nickname is Z-Bo but that’s too cool. Instead call home Z-Bo Peep or Z-Bo the clown.

Why he isn’t good: Ok he USED to be good. That doesn’t mean he is still good. The twin towers in Gobert and Favors also have a knack for making opposing big men look bad.

College: The Kentucky “Almost Undefeated” Wildcats whose unbeaten streak ended against Wisconsin in the Final Four when it mattered most in 2015.

Nicknames: His last name sounds like a cross between a bad vegetable (cauliflower) and a Halloween monster (Frankenstein). If I was there I would yell “Man eating vegetable” and hopefully he would be on the sidelines eating a cauliflower to prove my point. “Cauley-Stein… it is alive!” is good but maybe too much. If that’s too “punny” for you then I would just yell “Undefeated” or “Wisconsin”. Bringing up a player’s past failures in college makes it likely the past repeats itself.

Why he’s not good: Like Buddy Hield he was good in college but he is just ok in the NBA and Gobert will shut down anything he wants to do.

The Kings used to be good when Chris Webber was there but thanks to a gambling ref and the Shaq and Kobe Lakers the Jazz have made the finals twice more than the Kings of Sacramento. Maybe with the Jazz purple coming back in classic uniforms this year there will be a new royal purple team atop the Wsstern Conference and it surely won’t be residing in the Golden 1 center. Renaming your arena to sound like the Warriors doesn’t make you as good as the Warriors.

Final Score Prediction: Jazz by 90. Ok that’s not fair. Jazz by 30 IF we show mercy and throw in our scrubs by halftime.